Dear Google. You are waging an automated war on developers, and unaware you are hurting yourself.

If you’ve spent more than 5 minutes on this site, or know me, you’d know that I developed the first dice rolling app for Android Wear. This was uploaded to the Play Store in adherence with Play Store policy of the time. I released a few updates, then went silent for a while.

Around three weeks ago I received an email, advising that Android Wear 2.0 was coming soon and that I needed to take action to make my app compatible:

In the original days of Android Wear development, apps had to be distributed via a “wrapper” app: an app to install onto your phone, which would then push the application to the Wear device. I chose to make the wrapper app fully functional by itself, initially as a progress step to the final program but ultimately able to work without a Wear Device. If that wasn’t to be the case anymore I decided that I wanted to remain “compliant” and removed the wrapper app, updated the app to the latest API, and submitted the update.

I received feedback within weeks from users wanting to use the app, but being told their device wasn’t compatible. After digging into my install numbers, it seemed more users were using the “wrapper” app than I had first thought. So I put in the time this past weekend to fix this situation:

This seemed a solid enough solution. But not according to Google. Two days ago I received a notification that my app was rejected due to containing “sexually explicit content”. I was completely perplexed: how the hell can a dice rolling app contain sexually explicit content!? As sexy as a twenty sided dice is… no, this made zero sense. Needless to say, I appealed this!

The appeal process is a form, and I was told that it would take up to 72 hours to be looked at. In the meantime, I took at look at the policy I supposedly had breached. Going through Hedra, it did not match any of these conditions:

Some further correspondence, and it turns out that it was this very site that was found to be problematic. To which I take both personal and professional offense – some of my art and photography portrays nudity, but it is not sexually explicit. However, Google translates any nudity to be sexually explicit it turns out. One wonders how they get away with their own app on the play store… or art galleries. Or Greek/Roman history. Or music albums.

The URL they cited was my Vector Art page. Let’s take a look at this: 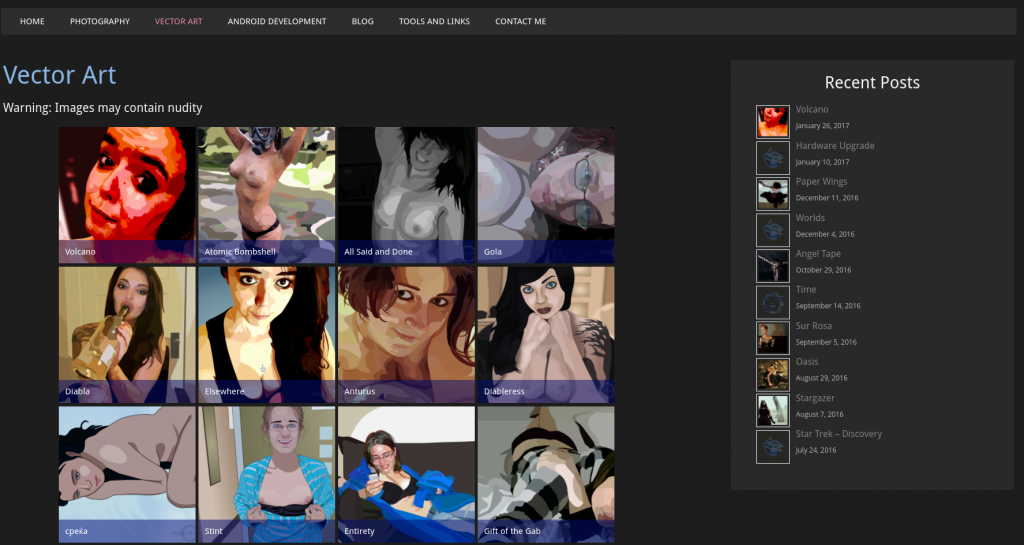 Take note I had taken extreme care in pixel blurring exposed nipples on the main page FOR THIS VERY REASON. And this had not being a problem for my past two released apps (Hedra and Hedra Free). This site fits within the very same policy I was accused of breaching.

I fumed on this, toyed with the idea of resubmitting with a google search result as my home page… ultimately decided I had enough stress from this without escalating. I removed my homepage from the app store listing (as per the email, “Please remove all sexual content from your supported website or remove the URL link from your store listing, and make sure you’ve corrected any other policy violations. “) and resubmitted.

Within two hours, my app was banned from the play store and a strike was made against my account. The reason: “it violates the sexually explicit content policy by containing images with nudity”. I’m not joking:

Pray tell where the hell is there nudity in this? Here are the texture files, can you see it? I can’t.

So now I’ve filed another appeal. And live with the possibility that I am going to lose access to all of my google play services, including purchases. Music, TV/Movies, Books, almost 14 years of email… and there is no way to talk to a human being at Google about this. No way to get this fixed up.

I’ve been an early adopter of Google for years. I used the search engine back in 1999. I was one of the first 100,000 Gmail users. Owned one of the first 1000 Nexus phones in Australia, and since have owned 10 Nexus devices since. I was a day one buyer for the LG G Watch, which launched Android Wear. Day one adopter of Google Photos. My friends and colleagues can attest that I’ve been somewhat of a fanboy.

Google, this is how you make your fans lose faith. I was wounded by the cancellation of the Nexus line, but “kept the faith” as it were. If this appeal loses out, I am making you a guarantee that no Google hardware or software purchases will be in my future.

And all this because Android Wear 2.0 is around the corner…

The frustration continues. My last appeal was accepted:

So again, the Google Play interpretation of their own content policy varies (is this the third or the fourth variation of it? I’ve lost count) from what they actually publish. Their is no nudity in the app, the store listing does not include any link to my website… for the SECOND time.

I’ve resubmitted (with no changes since the last submission fit their criteria 100%), and sent the following email – for all the good it will do:

I’m at a loss because I ALREADY did the above, and resubmitted, and got a strike against my account for the effort. My website is not linked, there is no sexually explicit content in the app. And this was also true on my last suspension that cost me a strike against my account.
Please link me directly to where in the store listing or the app that this content appears. I am resubmitting, but I am keeping this email for legal purposes – failure to provide these contents shall be used as evidence against further strikes on my account.
This process has being degrading and dehumanizing, and your corporation and team as a whole should be ashamed of yourselves for such a low level of customer service.

Preparing for another strike, and weighing up my options now against this automated moron machine…
Scroll Up