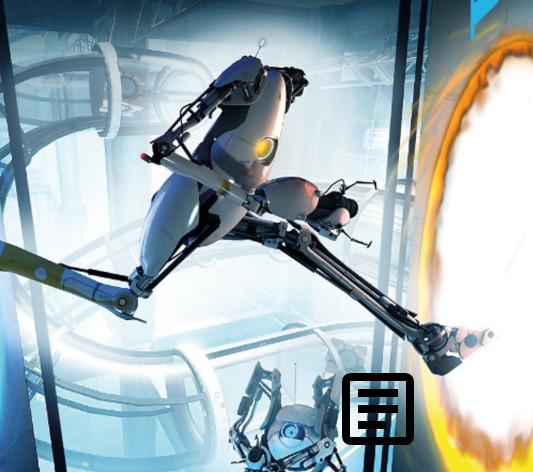 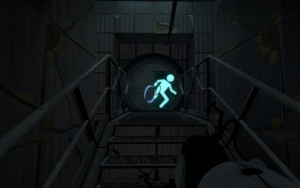 Spoilers await you. I’ll try not to be too nasty, but abandon surprise all ye who read past this.

Back in the dark and mystical past of 2007, Valve released Portal with the Orange Box. You know this was a long time ago because people still believed that Half Life 2 Episode 3 would beat Duke Nukem Forever to the shelves. I guess the joke is on all of us whilst Valve swim in their overflowing pools of money.

Portal was something special alright. In fact it was easily the pick of the box set,  because no-one should care about Sim Team Fortress 2: Funny Hats Edition. It was well paced, it was clever, and it was funny. It flooded the internet with cakes and was still alive long after. I guess this is what it’s like to be a parent, to grow to hate something that you once loved.

And here we are four years later, and Valve once again have extended their begging bowl to all of us. I gave them the rather cheap retail price, my car keys, the soul of my first born to get my hands on this. But was it worth it?

I had delayed on purchasing this to align with a long weekend, so when I sat down to purchase it on Steam I was forced to wait another hour or so whilst it downloaded 10GB. Perhaps it’s a sign of how far we’ve come that these high download speeds now annoy me. Or a sign that I should have pre-loaded.

An hour of Minecrafting/Waiting later, it was time for business.

Once again you play Chell. You awaken in some dingy motel room, and are led through some basic instructions. The ominously commanding computer voice informs you that you have being asleep for 50 years. As this sinks in, you are forced to go back to sleep.

You awaken, and the cleaning team from Silent Hill have had a go at your room. It is dilapidated, and the malfunctioning computer voice fails to tell you quite how many years it has really been. Decades? Centuries? Who knows. 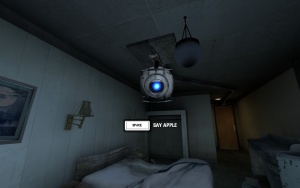 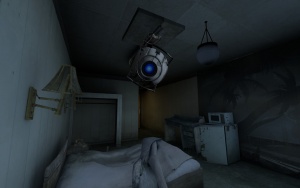 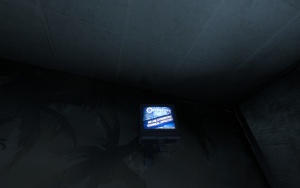 You are introduced to Wheatley, a GLADoS style personality core with a Brit accent. Instantly he springs to action, teaming up with Chell to escape the facility. But before long it becomes apparent that he’s not the brightest sphere in the storage room.

Time has not being kind to Aperture Laboratories. Greenery grows through the cracks in the walls, glass is broken, grime is everywhere. Imagine Chernobyl with Star Trek level technology, and you have a good idea of what things are like. 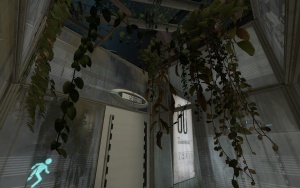 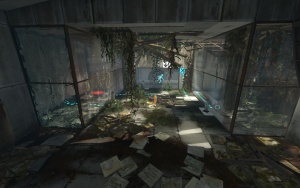 It isn’t too long before you find yourself going through some familiar test chambers from the first game, in pursuit of the Portal Gun. Once again, you only have control over a single colour portal at first, which is fine for easing you into the puzzles. Our old graffiti artist friend from the first game has also being around, leaving some truly beautiful pieces around. His story has being expanded through a tie in comic, but that is not too relevant right now. 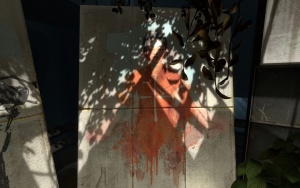 Wheatley will eventually lead you through GLADoS’s chamber, where in a bumbling error she is awakened. Wheatley is discarded, and once again you are stuck in her clutches. And she has something in mind for you: TESTING!

The strongest positive of Portal 2 is the same as it’s original; the puzzles can be challenging, but when you do figure out the solution you get a strong sense of accomplishment. These moments make you feel really intelligent and smart.

The strongest negative of Portal 2 is when the puzzles are too hard. When you go to Youtube to see the correct solution, it leaves you feeling stupid and dumb.

It’s not just all blue portal/orange portal now. There are several new puzzle elements. First we have light bridges, glowing blue walkways which can be redirected through Portals. They can be used for walking on, or to block turrets drawing line of sight to you. 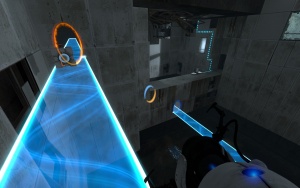 There are also lasers, though there are no fricking Sharks. No ill-tempered sea bass either. Lasers hurt, and can also be redirected with portals. There is also a special type of block fitted with lenses for pointing a laser more precisely. The first moment you use one of these to destroy turrets is very gratifying. 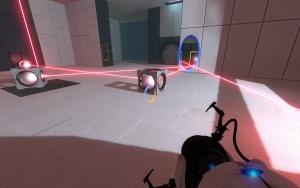 Later in the game there are also three gels introduced as you explore the buried past of Aperture Laboratories. These gels can come out of spouts, often triggered by switches. Using portals, you can paint surfaces with them to gain their special properties.

The first gel is blue, and repulses. Jump on it and you will bounce off at the same speed. The second gel is orange, and speeds you up. You will run approximately 5 times faster over it. At first I thought this would be used for time specific puzzles, but it’s used instead for gaining momentum. Finally, their is a white gel, made from ground up moon rocks. This gel will allow you to place portals on solid surfaces where you once could not. This is a nice system, but sadly it was puzzles involving this gel that stumped me most. 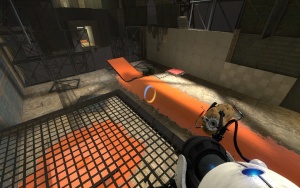 Another gripe I have with this game is the amount of loading screens. The original game broke up most test chambers with an elevator ride which was a cover for a more-or-less seamless loading pause. This was good four year ago. Now every single puzzle leads to an elevator, with an immersion breaking loading sequence. The art direction for these is alright, often Aperture Science material, but this feels like a step backwards instead of forward. And with the frequency they felt rather jarring. 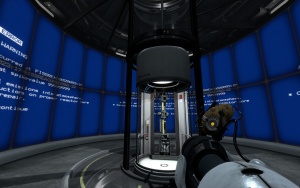 It’s a good game all up. I’ve played it one and a half times so far, because it immersed me enough that I forgot to keep taking screenshots. Like the Orange Box, there is also a developers commentary which I look forward to listening more closely to.

There is also a co-operative mode, but I only have time to play with myself (*ba dum tish*) so your guess is as good as mine.

Final Score: Ten Slices of Cake out of Ten. This one will definitely be the game of the year. (PROVE ME WRONG DUKE NUKEM FOREVER / SKYRIM / OTHER GAME THAT I SHOULD BE PAYING CLOSER ATTENTION TO THE DEVELOPMENT OF!)